Some of the different types of brick bonds are,

For English and Flemish bond refer in our website.

In this arrangement of bonding, all the bricks are laid as stretchers. The overlap, which is usually of half brick, is obtained by commencing each alternate course with a half brick bat. Stretching bond is used for half brick wall only. This bond is also termed as running bond and is commonly adopted in the construction of half brick thick leaves of cavity walls, partition walls, etc. Since there are no headers, suitable reinforcement should be used for structural bond. 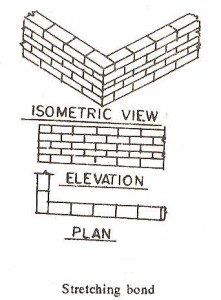 In this type of bonding all the bricks are laid as headers on the faces. The overlap, which is usually-of half the width of the brick is obtained by introducing a three-quarter bat in each alternate course at quoins. This bond permits better alignment and  as such it is used for walls curved on plan. This bond is chiefly used for footings in foundations for better transverse distribution of load. 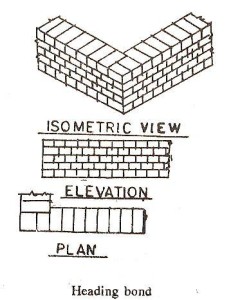 This type of bond is suitably adopted for one brick thick wall which may act as a garden wall or a boundary wall. In garden wall bond, it is possible to build uniform faces for a wall without much labour or expense. This type of bond is not so strong as English bond and its use is restricted to the construction of dwarf walls or other similar types of walls which are not subjected to large stresses. On accounts of its good appearance, this bond is sometimes used for the construction of the outer leaves of cavity walls.

There are two types of garden wall bond,

(a) English garden wall bond. The general arrangement of bricks in this type of bonding is similar to that of English bond except that the heading courses are only inserted at every fourth or sixth course. Usually the arrangement consists of one course of headers to three courses of stretchers. A queen closer is placed next to the quoin header of the heading course to give the necessary lap. 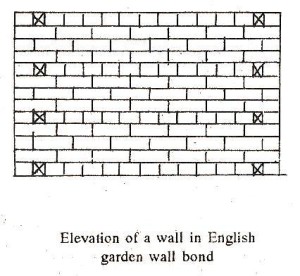 (b) Flemish garden wall bond. This consists of alternate course composed of one header to three or sometimes even five stretchers in series throughout the length of the courses. Each alternate course contains a three quarter bat placed next to the quoin header and a header is laid over the middle of each central stretcher. 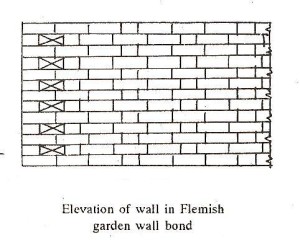 This arrangement of bricks is adopted for thick walls, where the facing and backing are desired to be constructed with bricks of different thickness. This bond consists of heading and stretching courses so arranged that one heading course comes after several stretching courses. Since the number of joints in the backing and the facing differ greatly, the load distribution is not uniform. This may sometimes lead to unequal settlement of the two thickness of the wall.

This is a bond in brick work in which the bonding bricks are laid at any angle other than zero or ninety degrees. This arrangement helps to increase the longitudinal stability of thick walls built in English bond. In this arrangement of bonding, the space between the external stretchers of a wall is filled with bricks inclined to the face of the wall. This bond is introduced at certain intervals along the height of a wall.

(a) Herring-bone bond. This type of bond is best suited for very thick walls usually not less than four bricks thick. In this arrangement of brick work, bricks are laid in course inclined at 45° in two directions from the centre. This bond is also commonly used for brick pavings. 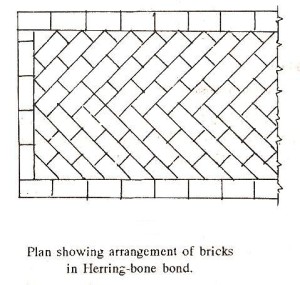 (b) Diagonal bond. This bond is best suited for walls which are 2 to 4 brick thick. This bond is usually introduced at every fifth or seventh course along the height of the wall. In this bond, the bricks arc placed end to end in such a way that extreme corners of the series remain in contact with the stretchers. 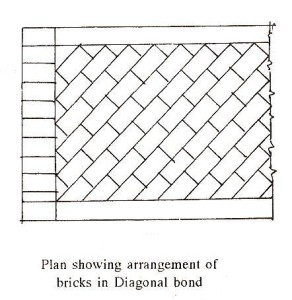 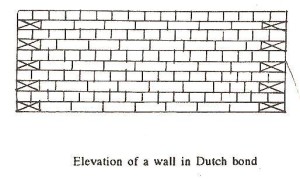 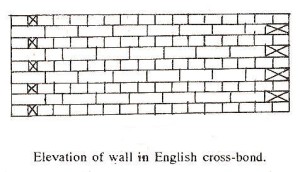 This is similar to herring-bone bond with the only difference that in this case the bricks are laid in a zig-zag fashion. This is commonly adopted in brick paved flooring. 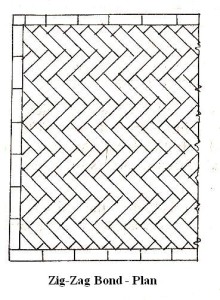