A caisson is a water-tight box like structure or a chamber, made of wood, steel, or concrete, usually sunk by excavating within it, for the purpose of gaining access to the bed of a stream and placing the foundations at a prescribed depth and which subsequently forms part of the foundation itself. Caissons are adopted when the depth of water is great and the foundations are to be laid under water. Caissons are generally built on the shore and launched in to the river floated to the site and sunk at the proper position.

The shape and size of a caisson depends upon the nature of structure for which it is to be built and the depth up to which it is required to be sunk. Caissons can be broadly classified in the following three different types.

Depending upon their shape, open caissons can be further classified as,

This is a box type structure having no top or bottom(during construction) and mainly consists of vertical walls. The method of construction of a typical single wall open caisson is describe below. Wherever necessary the site is made dry by dewatering the area by adopting suitable method (By constructing cofferdam, sheet piling etc.). A pit of suitable size and about 3 to 4 meter deep is excavated at the site where the caisson is to be sunk. The cutting edge is then placed at the bottom of the pit. Above the cutting edge, the wall reinforcements are suitably tied up and the shuttering for casting the concrete wall is erected. The caisson walls are then concreted in lifts to a suitable height. When the freshly laid concrete has gained sufficient strength, sinking operation is started. The caisson sinks due to its own weight when the soil from the space inside s removed by use of clam shell or any other method. As sinking proceeds, additional sections of the caisson walls are successively cast. Sinking is stopped while each section is concreted and it is resumed only after the concreted section has gained sufficient strength. When the caisson is sunk to the required depth, its base is plugged by providing 15 to 45 m thick layer of concrete (concrete seal). The concrete for the seal is placed by use of a tremie pipe or by a bottom dump bucket. After the concrete seal has set, the water inside the caisson is pumped out and the empty space is filled with sand, gravel or concrete.

This may be defined as a cylindrical shell made up of timber, masonry, steel or reinforced concrete shod with a cutting edge and which is sunk by excavating the soil within the shell. The thickness of the caisson wall must be adequate so that when the inside soil is dredged out, it sinks under its own weight. To facilitate sinking of the caisson water jets are sometimes used around the sides which decrease the skin friction. Cylindrical open caisson is also known as well caisson. This type of caisson is similar in all respect to the single wall open caisson except that its wall is circular in plan. The method of construction of well caisson is exactly similar to that of a single wall open caisson described earlier. After the well is sunk to the desired depth its bottom is sealed with concrete. This type of caisson is commonly adopted for providing foundation for bridges and other structures to be built in rivers and waterways. 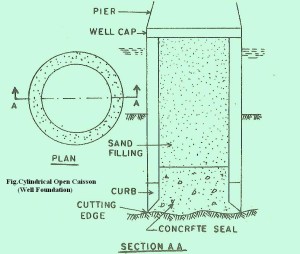 This type of caisson has the distinction of being employed for the deepest foundation for, bridge piers, abutments and other similar structures. The caisson in this case is rectangular or square in plan and is further sub-divided into smaller sections from inside forming open walls. The outside walls as well as the inside divider walls are normally made up of reinforced concrete. The caisson is sunk by excavating soil through the wells by means of dredges. After the caisson is sunk to the required depth, its base is plugged with a concrete seal and the walls are filled with sand or concrete. From the point of view of control during sinking, this type of caisson has definite advantage over the other types described earlier. In this case, any tendency of the caisson to tilt or to drift from its position during the process of sinking, can be checked by dredging the soil from the appropriate wells. 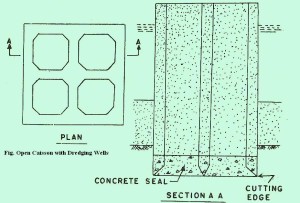 This type of caisson is similar to open caisson except that it is closed at bottom. The caisson is cast and cured on land and when required, it is launched in water and towed to the site for sinking. The caisson is sunk by filling sand, gravel, or concrete in the empty space inside. The place where the caisson base is to rest must be levelled and as such box caissons are used in places where the strata of sufficient bearing capacity is available near the ground. In normal practice, the soft natural bottom soil of the river bed is dredged out to some depth and the trench thus formed is filled with sand to have a levelled base. The function of the sand layer is to uniformly distribute the superimposed loads over the soil below and thus avoid tilting of the caisson. 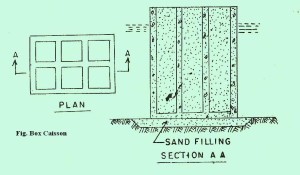 This type of caisson is closed at top and open (during construction) at the bottom. The water is excluded from the caisson chamber by means of compressed air. The construction of the pneumatic caisson is similar to the types described above, except that, the working chamber and shaft are made air-tight. In order that the workmen may carry out excavation work underneath the caisson and the water may not find its way inside from below, the pressure of the compressed air in the shaft is kept just higher than that of the water at that depth. Each caisson has two air locks. Through one air lock workmen go down for working while through the other excavated material is taken out. An air lock essentially consists of a steel chamber having two air-tight doors. One door of this chamber serves as an entry for men and material from outside into the steel chamber and the other door leads to the air shaft. When a workman enters the airlock from outside, the pressure inside the airlock is the same as that of outside atmosphere. Thereafter the outside door is closed and the pressure inside the airlock is raised slowly. When the pressure inside the airlock becomes equal to the pressure in the caisson, the door of the airlock which leads to the air shaft is opened and the workman goes down the air-shaft with the help of a ladder installed therein. Exactly reverse procedure is followed when the workman comes out of the caisson. Air-shaft provides means of access for the worker from airlock down to the working chamber. 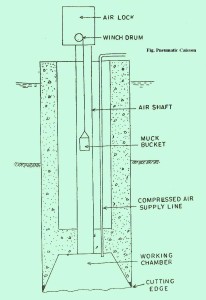 This method of providing foundation is complicated, expensive and very slow. However, in places where it is rather difficult to use bulky equipment required for alternative method, pneumatic caissons appear to be the only choice. The chief advantage of this method is that entire operation of sinking the caisson can be carried out under controlled conditions. This method provides better facilities for removing obstructions, inspection of work and concreting of foundations bed.

This type of caisson is suitable for depths ranging from 25 m to 40 m. At higher depths, the persons working inside the caisson for sinking operation are liable to get caisson disease (resulting from the expansion of bubbles of air trapped on joints, muscles etc.).