It may be defined as the operation of keeping a freshly placed concrete moist during a specified period after its finishing to ensure complete hydration of cement particles or other cementing material for obtaining a properly hardened concrete.

The concrete starts attaining its strength immediately after its setting is completed, and it continues to gain strength there after along with time. About 90% of concrete strength is attained in the first 28 days and its value is generally known ad design strength. Development of the concrete strength is primarily due to hydration of cement which takes place only in the presence of water. It is therefore necessary that water in the capillaries in prevented from evaporating. For proper hydration of cement particles in a freshly placed and compacted concrete, a proper environment of humidity and temperature needs be maintained. This process is called ‘curing’ 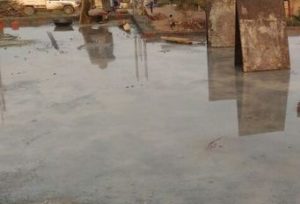 To achieve proper curing of concrete, the following requirement should be fulfilled.

(a) Maintenance of adequate water content in the concrete which is essential for the hydration of cement particles.

(b) Maintenance of uniform temperature in the whole mass of the concrete.

(c) Maintenance of the concrete temperature above the freezing point in cold climatic regions.

If a freshly place concrete is left in air, it attains a strength of about 50% of the concrete cured for 14 days. This is due to the face that hydration of cement takes place only in the presence of water in the pores. The rate of hydration is maximum at saturation pressure, i.e. when all the voids are fully filled with water. As the time passes on, the vapour pressure in the capillaries is reduced and hence the rate of hydration and subsequently the rate of development of strength is reduced. It is therefore essential to prevent even a small of water during the process of hardening even if the water cement ratio is above 0.5 in the mix. In addition of the strength development, it also affects the following qualities of the concrete:

(i) It improves the wearing and water resisting qualities of the cement concrete.

(ii) It improves the durability and impermeability of the concrete structure.

(iii) It reduces the shrinkage.

There are various methods of curing and adopt ion of a particular method depends upon the climatic conditions and the nature of the work. The commonly adopted method of curing concrete may be broadly divided into four categories:

This method is considered the best method of curing because it  satisfies all the necessary requirements of curing i.e. continuance of hydration elimination of shrinkage and controlling the heat of hydration. Water curing may be done by the following methods.

In this method, the surface are of the structure is divided into a number of suitable sized rectangles, having their bunds of clay and the ponds thus formed are filled in with water, is called water ponding method. The filling of water in these ponds is done twice or thrice a day depending upon the climatic conditions. This is the most efficient method of curing. It is suitable for the structures having horizontal surfaces such as floors, roof slabs, road and airfield Pavements. The only disadvantage of this method ¡s that it becomes difficult to remove the clay after curing and thus surface becomes muddy.

In this method, the surface of concrete structure is kept moist by spraying water at regular intervals. Water may be either sprayed from the performed plastic box or sprinkled on the top surface to allow it to rundown between the from work and the concrete surface.

In this method, in which wet covering such as wet gunny-bags, hessian cloth, jute mattings, etc. are wrapped around vertical surfaces of the structures for keeping the concrete moist. This is most suitable for vertical columns.

In this method, the wetted concrete surface is covered by a layer of water proof material to prevent the evaporation of water from the concrete, is called membrane curing. This method is adopted in places where there is an acute shortage of water and curing method is not found economical. The membranes which may be either is solid or liquid form are generally known as sealing compounds. Bituminised water proof papers, bitumen emulsions, wax emulsion, plastic films, etc. are the common types of membranes used.

Bitumen curing membrane is applied over the surface for curing only after curing the structure for 24 hours with gunny bags. Loose water is dried from the surface and then liquid asphalt is sprayed throughout. The moisture in the concrete thus preserved is quite enough for curing purposes.

Though the concrete develops the strength very soon, the following are the demerits of the method.

(i) There is 55% reduction in the bond strength of an R.C.C. structure.

(ii) Due to rapid drying and cooling, cracks may develop.

(iii) The method is unsuitable if the concrete contains high alumina cement.