In Flemish bond, each course consists of alternate headers and stretchers. The alternate headers of each course are centered over the stretchers in the course below. Every alternate course starts with a header at the corner. For the breaking of vertical joints in the successive courses, closers are inserted in alternate courses next to the quoin header. In walls having their thickness equal to odd number of half bricks, bats are essentially used to achieve the bond. 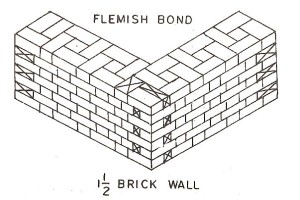 In Double Flemish Bond, each course presents the same appearance both in the front and back elevations. Every course consists of headers and stretchers laid alternately. This type of bond is best suited from considerations of economy and appearance. It enables the one brick wall to have flush  and uniform faces on both the sides. This type of bonding is comparatively weaker than English bond.