(1) In English bond, a heading course should never start with a queen closer as it is liable to get displaced in this position.

(2) In the stretcher course, the stretchers should have a minimum lap of 1/4th their length over the headers.

(3) Walls having their thickness equal to an even number of half bricks, i.e., one brick thick wail, 2 brick thick wall, 3 brick thick wall and so on, present the same appearance on both the faces, i .e. a course consisting of headers on front face will show headers on the back face also.

Isometric view of  1½ brick wall in English bond is shown below, 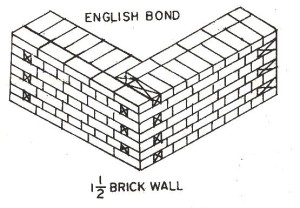 (5) In thick walls the middle portion is entirely filled with header to prevent the formation of vertical joints in the body of the wall.