Dead Shores or Vertical Shores, In this system of shoring, the vertical members known as ‘dead shores’ are used to support temporarily the walls, roofs, floors, etc., by providing horizontal members known as needles, to meet one or more of the following objectives:

(i) To rebuild the lower part of a defective load bearing wall; or

(ii) To rebuild (or replace) or deepen the existing foundations, which have either become unsafe or require strengthening for carrying heavier loads; or 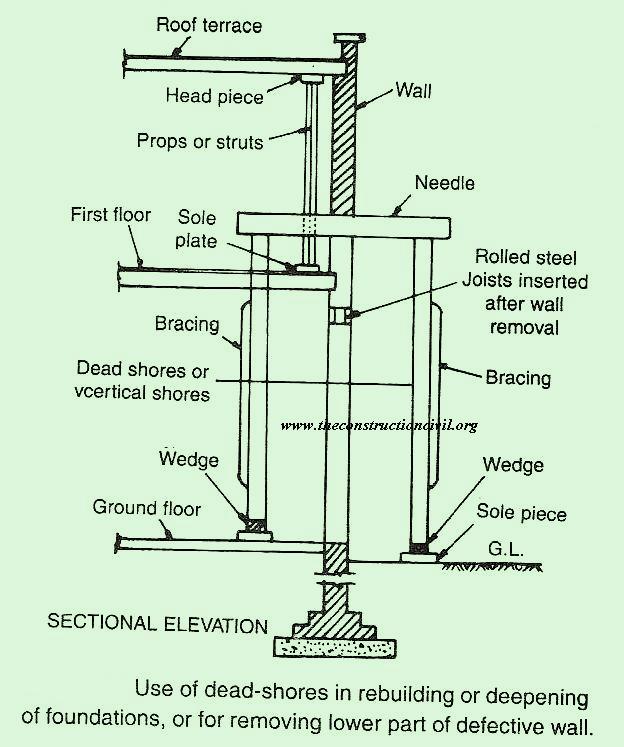 (iii) To provide large openings in the existing walls such as doors, windows, shop fronts or garages at a lower level.

In the above figure, the arrangement is shown to meet first two objectives. In this system, wooden need less consisting of thick sections are used to transfer the overhead loads to the properly braced vertical shores. These vertical or dead shores, in turn, transfer those loads to the ground on firm foundations below. The other details regarding introducing of rolled steel joists for supporting, strutting of floors by props, use of wedges, sole pieces, are self-explanatory).

In the below figure, the arrangement is shown to meet the third objective, i.e., providing a large opening in an existing wall. To meet this objective following procedure is adopted. 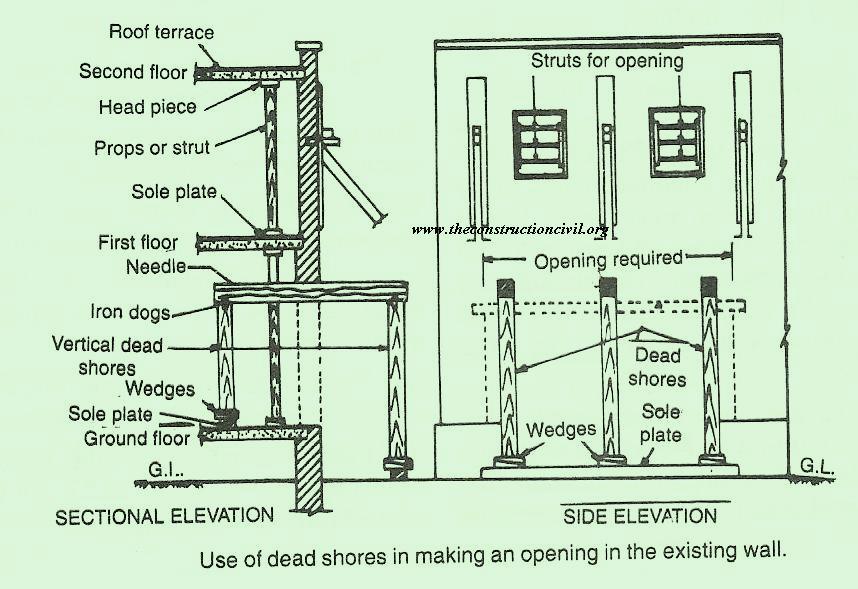 (i) Before providing shores to a building, all door and window openings are properly strutted to resist any possible deformation, and then inside floors of the building are also strutted by props or vertical posts. At the top and bottom of these vertical struts or posts, timber heads and sole pieces are provided to distribute the load more effectively, wedges are also used at the bottom or foot of prop for tightening purpose.

(ii) Holes are than cut in the wall by crow bar at points above the required opening, at a distance of I to 2.5 m depending upon the weight of structure above.

(iii) Through these holes, timber or steel horizontal beams, called needles, are inserted and projected at right angles on each side of the wall. The projected ends of needle beams are supported on heavy transfer the loads to the ground and hence are made to rest on a sole plate, firmly bedded on the ground.

(iv) The shores are removed only after the new construction work has attained sufficient strength and this period of removal usually is not less than 7 days.
(v) The sequence of removal of shoring system should be needles first and then strutting from openings and floor strutting inside the building.

NOTE: Sometimes, raking shores are provided to support the wall from above the proposed opening to safeguard against shocks and vibrations during wall cutting. If raking shores are used, they should be removed after the whole dead-shore system is removed.

Got Useful Info on Dead Shores ? Pls LIke Us…

Shoring and Types of Shoring