The types of boring methods commonly adopted for soil exploration are as under :-

The examination of the sub-soil conditions for simple buildings to be erected in clayey or sandy soil can be best performed by a post hole auger. The auger is held vertically and is driven into the ground by rotating its handle by applying leverage. The auger is pressed down during the process of rotation. At every 30 cm of depth penetrated, the auger is taken out and the samples of the soils are collected separately for examination. This method can be conveniently used for soil penetration up to 15 m depth. The type of augers commonly used are shown below. For deeper holes or in grounds where gravel, boulders or comp act material is present, this method is not adopted. 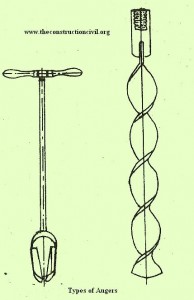 (b) Shell and auger boring:

In this method different type of tools have to be adopted for boring. In case of soft to stiff clay, cylindrical auger consisting of a hollow tube of 75 to 200mm in diameter with a cutting edge at its bottom is used. In case of various stiff and hard clay, shells with cutting edge or teeth at lower end are to be adopted while in case of sandy soil, shells or sand, pumps are used for boring. By this method it is possible to make vertical boring up to 200 mm in diameter and 25 m in depth by use of a hand rig. By use of mechanical rig it is possible to extend the depth of the bore hole up to 50 m. The samples of the soil are recovered at regular intervals (or whenever there is a change in strata) for conducting tests in laboratory for identification of soils and establishing properties of the sub-soil strata at various depths.

For test boring over 3 meter in depth, this method can be conveniently used. In this method a hollow steel pipe known as casing pipe or drive pipe is driven into the ground for a certain depth. Then a pipe usually known as water jet pipe or wash pipe, which is shorter in diameter, is lowered into the casing pipe. At its upper end, the wash pipe is connected to water supply system while the lower end of the pipe is contracted so as to produce jet action. Water under considerable pressure is forced down the wash pipe. The hydraulic pressure displaces the material immediately below the pipe and the slurry thus formed is forced up through the annular space between the two pipes. The slurry is collected and samples of material encountered are obtained by settlement. In this process the particles of finer material like clay, loam etc. do not settle easily and the larger and heavy particles of the soil may not be brought up at all. Moreover, the exact position of a material in the formation cannot be easily be located. However the change of stratification can be guessed from the rate of progress of driving the casing pipe as well as the color of slurry flowing out. Yet the results obtained by wash boring process give fairly good information about the nature of the sub-soil strata. This method can be adopted in soft to stiff cohesive soils and fine sand.

This method consists of breaking up of the sub-strata by repeated blows from a bit or chisel. The material thus pulverized is converted into slurry by pouring water in the bore. At intervals the slurry is bailed out of the hole and dried for examination. This method can be adopted in rocks and soils having boulders. However this method is not recommended for loose sand or clayey soils.

When rocks or hard pans are to be penetrated for examination, core drilling is done to get undisturbed samples of the formation. In this process a hole is made by rotating a hollow steel tube having a cutting bit at its base. The cutting bit makes an annular cut in the strata and leaves a cylindrical core of the material in the hollow tube. Two types of cutting bits are generally used, namely, diamond bit and shot bit. Diamond bit consists of industrial diamonds set in the face of the bit and in shot bit, chilled shot is used as an abrasive to cut the hard pan. When core samples of small diameter are needed, diamond bit is preferred.